End of the Season

For another year, that is it for pheasant, partridge, duck and snipe.  The season ended on Wednesday the 1st February.

I don’t shoot, but all the land around me is owned by a large estate and is stocked with pheasant and grouse, and the snipe and duck are wild. On a shoot day the guns can be heard all around for most of the day as there is a tarn to the north and east as well as woodland.  There are pens on two sides where the reared from when they are a few weeks old.  They are fed in the pens and then nearer to the start of the season released into the wild. They then make the short flight over to my garden where they help themselves to my vegetables and chicken feed.

Last summer there were some very confident pheasants who thought they were chickens and all but moved in.

The beaters are allowed to walk across my land the “beat” the birds off, towards the guns waiting in the neighbouring field.

For this right, I am, rather than being paid, allowed to ride my horse and walk across the estate land, but also I am given birds.  As the season comes towards an end, having started in September for ducks and grouse, and October for partridge, I start to worry I will not have enough birds to keep me going through until next year.  So I have a habit of stocking the freezer up.  I put them in whole, feathers and all, and when I come to cook them find it easier to just skin, along with the feathers at the time, it also means I can put them straight into the freezer when short of time.

We went for a walk last weekend, via the gamekeepers and came back laden down with a few brace, and then on Wednesday, the gamekeeper called around with birds from the last shoot.

So freezer now full, all that is required are a few good recipes, I have a pheasant and mango recipe here…. pheasant-with-mango-chutney  and more to follow. 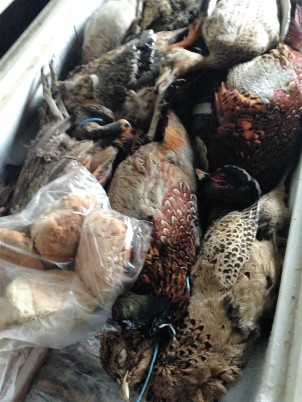 last of the season

walk via the gamekeepers